Last week was all about thankfulness.  Now, a week into the holiday season and with winter apparently ready to hit us full on, it’s time for a little crankfulness.

Being cranky is easy when we look outside to see a cold, dreary, dank, dark world. But doing something about a bad mood doesn’t have to be difficult.  In this case, I’m talking about counteracting our continued destruction of American outdoor values. 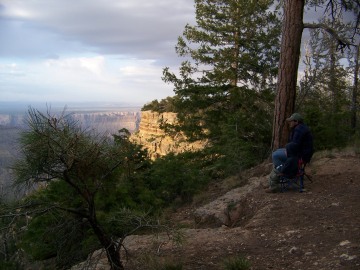 My son Sam and brother-in-law Fernando enjoying a sunset on the Cape Final Trail, Grand Canyon’s North Rim, 2007. The park is one of many funded by the LWCF.

Before we get there, a little scene-setting is in order.  I’ve been hoping recently for at least a bit of warmer, drier weather to finish up the fall yard and garden cleanup – getting rid of the decay and dead remains of that which once brought beauty and hope, the growth from warmer seasons when it’s easier to focus on good things in life.

In winter, we may be prone to looking around and detecting rot and putrescence that eventually freezes into a lump of useless, ugly blight.  You know what I mean:  Congress.

Not all of Congress. It’s primarily one guy, who also happens to be the chairman of the House Committee on Natural Resources –Rob Bishop of Utah.

Never was there a congressman whose first name more aptly described his relationship to the American people.

He’s the guy holding up reauthorization of the Land and Water Conservation Fund, a program which for 50 years provided the country with many of its spectacular and well known outdoor recreation opportunities, along with immeasurable benefits to communities, regions and states that used the fund for park and recreation projects.

END_OF_DOCUMENT_TOKEN_TO_BE_REPLACED

This is my second weekly column for the Portage County Gazette, whose new web site is almost ready. — Steve 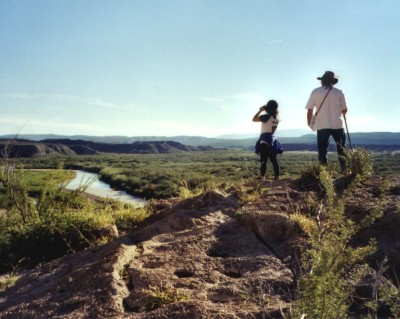 The best pictures of nature show less of the people and more of the scenery, like these native grinding holes in a bluff overlooking the Rio Grande and Mexico (Big Bend National Park, 2000) .

Selfie sticks are getting whacked a lot lately.

For those still living in the world of talking to others, selfie sticks are the devices that allow one to avoid all human contact while holding a camera at more than arm’s length and blessing everyone with yet another shot of one’s beaming mug.

Banned from some Disney World rides because of the danger they can cause, they also are forbidden at many concerts and festivals because they block people’s views. Coachella’s web site called them “narsisstics.”

For obvious reasons, the secret service didn’t want them near the Pope on his U.S. visit. Reuters News Service  and Mashable recently told us that more people have died taking selfies in 2015 than have been killed in shark attacks.  Search “selfies” in the New York Times and you’ll get all sorts of cogent, thoughtful, and recriminating pieces about the meaning of selfies in our culture.

This is the story of my selfie stick.