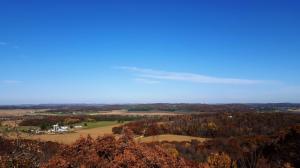 Trips to the Twin Cities area are always fun for me and my family, but even though Minnesotans are right up there with Sconnies when it comes to good Midwestern manners, the big city still seems to sicken plenty of folks with various forms of affluenza, common coldness and rudella, among other diseases.

So, if you’re headed in that general direction and need a breath of fresh air and a slice of natural beauty before hitting the urban jungle, consider the Hoffman Hills Recreation Area as a stopover.

Least visited?  Not this past week

I’ve mentioned Tim Brewer’s guidebook, Wisconsin’s Outdoor Treasures, as a source that has yet to steer me wrong.  Because I was making a trip to Hudson last weekend – which as far as I’m concerned is merely an extension of Minneapolis-St. Paul despite being on the eastern bank of the St. Croix River – I followed Brewer’s advice for a visit to Hoffman Hills.

Just north of Menomonie, this small state park is characterized by Brewer as one of Wisconsin’s least visited, even on weekends – perhaps because its scenery is less spectacular than so many other northwestern Wisconsin natural areas.  But it does have relatively tall and steep hills, as the last glacier to cross Wisconsin didn’t hit the area.

Apparently I hit it on just the right – or wrong – weekend.  The 707-acre park’s main parking lot, which appears to hold just under 40 cars, had exactly two spaces left when I arrived.

There’s a slightly larger overflow parking lot down the road, on the edge of the Catherine Hoffman Hartl Memorial Wetland. I don’t know how many cars were there, but given the number of people I saw and heard in the park, it probably had a few.

A large party of adults and kids enjoyed a group picnic and playing games in the open space just past the parking lot.  No matter. Once I hit the Tower Nature Trail, billed as a two-mile loop to the park’s 60-foot observation tower atop a high point in the park, things quieted dramatically.

Although I could frequently hear exuberant, youthful shouting ringing through the hills from more than one direction, the peaceful woods enveloped me.

Hoffman’s well developed trail system seems to funnel everyone toward the tower atop one of the highest points in Dunn Count.  The park’s topography, excellent signage and the cleverness of the trail system seem to make it almost impossible to get lost. Virtually every trail offshoot still heads in the general direction of the tower and rejoins the path to the top.

At the same time, those offshoots meander to quiet, wooded areas of the park that allow both privacy and longer hikes with plenty of scenic variation.

Because I had less than two hours before I had to get back on the road, I was acutely aware of staying on a relatively direct path to the top. I also noticed that I never lost my bearings.

Each time I came to a trail juncture offering alternative paths, I could correctly guess which trail I needed to take for efficiency’s sake before confirming it on the map.  I also saw that, given more time, I could always take the less-efficient choice and still be heading in the same general direction.

I was startled by the contrast with many of my home-area favorites, such as Hartman Creek and state natural areas featuring the Ice Age Trail to our east, as well as Portage County’s Standing Rocks Park. There, I’ve become more easily disoriented simply because of the different physical layouts of those areas and the way trails are developed.

That’s not a criticism of those places – a great joy of nature is the privilege of feeling lost (assuming you don’t need to find your way somewhere quickly) and the challenge of knowing your location.  It’s just that Hoffman seems uniquely suited to wandering about on various loops and never stumbling off your path.

The most spectacular fall colors had apparently passed, but there was still plenty to see from up top, including large bands of golden yellow and all of the burnished shades of brown, copper, chestnut, chocolate and fading red, plus fields varying in color from emerald to straw. A few prosperous-looking farms and silos, distant hills and valleys, and plenty of blue sky lay all around.

Trails are wide enough for snow-grooming tractors, as the park is a popular cross-country skiing destination. It looks fun and challenging – perhaps a bit beyond my current skill in many places, as I’m not yet so great at stopping and controlling my downhill speed.  Hoffman has a few places where there are strenuous slopes for walking either up or down and plenty of more gentle inclines for walkers that would make for stimulating skiing and fantastic exercise.

Hoffman has a very nice group campsite with a small tiered fireplace area and an open-sided shelter with picnic tables partway up the tower trail.

Outside of the wetland area, the park is heavily forested and hilly, so the winding trails, changing elevations and fine trees (a dozen major types of oak, pine, hawthorn and others) make a great natural experience not too far from the big city.