A short stretch of the original Yellowstone Trail, shot during spring break 2015

I’ll just do the spoiler here: to see exactly where the trail goes — sort of — look at the wonderful links on the Yellowstone Trail Association website.  Visitors to the YTA site will need to click on the state links on the left-hand side of the page see available state-by-state maps and written descriptions of existing or obscured trail locations.

But back to my rambling:  the comment from the LIFE participant was, as one would expect the words of mostly retired, highly intelligent and no-nonsense folks to be, a bullseye.  Being too enamored with the things I was talking about, I was having too much fun on the journey of my talk.  At least some of the audience eventually wanted to get to the destination.

A road is simply an idea … a way we think we can use to get where we want to go.

My answer probably didn’t help some listeners, because it has two critical foundations: (1) where the trail still is kind of depends, but (2) it really doesn’t matter.  Or at least it doesn’t matter to me.  I hope a good number of my students will feel the same way.

When COMM 398, the “Words Are Roads Tour,” hits the Yellowstone Trail in May, we’ll have a destination, an itinerary and a planned route, but I would never consider it a good trip if we felt obligated to stay on the “real” and prescribed path.  To me, I explained to the LIFE group, a road is simply an idea.  It’s a way we think we can use to get to the place we want to go, and its ultimate path may sometimes wander.

Most journeys are actually a series of connected smaller segments that require more than one physical blacktop or stretch of macadam, unless you consider all connected roads a single entity — that is, “the road.” Roads might be separately built and named, but when we decide to join them together conceptually with a highway number or name, the parts become a whole.  The places along the road — the towns and farms and parks and tourist traps — can be considered parts of the road, depending on your philosophy and definitions.

The Yellowstone Trail is a perfect example.  It started as an idea to help join communities in the Upper Midwest, an effort centered at first in South Dakota.  It was conceived as a way to promote travel and commerce, both local and interstate.  Good roads meant less time to markets, to church, or to a county seat or state capital. Build the parts, give the parts a name, and the idea becomes a physical reality even while giving us a concept to wrap our brains around: “Hey, I can go down that thing to get from here to there.” 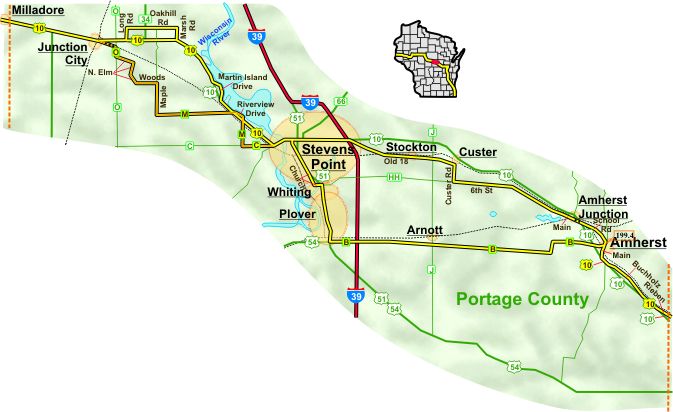 Even when people weren’t switching signs, the trail had more than one route through Portage County. (click map to go to Web site)

Roads change, of course. They are modernized, renamed, and rerouted as growth or decay change places along the way.  Routes used to promote growth or tourism were often altered simply by changing a sign to point from one direction to another — as was occasionally the case for competing interests in the early days of the Yellowstone Trail.  Folks in Wisconsin Rapids used to shift the signs in Waupaca to make the trail appear to go south of Stevens Point, and Point folks would change them back to direct travelers through Point.

A fantastic history of the trail, centered on the notion of the trail as an idea, has been done by John and Alice Ridge of Altoona, the folks who run the YTA  Web site and Yellowstone Trail Publishers. Their work Introducing the Yellowstone Trail: A Good Road from Plymouth Rock to Puget Sound is as fine a short book on a big idea as a reader could hope for.  Many of the times, places and people they bring to life in their book will provide COMM 398 students with concepts to ground their class experiences in, and probably in ways far better than I sometimes do.

Just ask the LIFE folks. Although I eventually did show them portions of the trail in Wisconsin, from the YTA site, I think some of them are still probably a little irked at me. I guess that’s why it’s good to know where the roads out of town are.