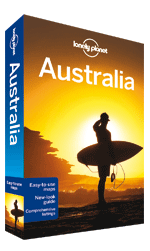 UWSP’s International Programs office keeps several of the well regarded Lonely Planet guides, including the 2013 edition of its 1,106-page Australia guide to the entire country.  One would expect this publisher’s Australian guides to be particularly good, as the company is based in Melbourne, and its story (which is included in the back of most of its guides, as well as online) will probably appeal to the average student, as it involves a beat-up car, a penurious budget and an idea.

Lonely Planet says great guidebooks should “inform, educate and amuse,” and most readers would likely agree that this book does a solid job of that.  Its sheer size means there’s plenty of information; that raises questions about whether it’s too massive to cart around on a short-term trip or whether it’s more than is needed for students who will generally be limited to the southeastern portion of the country.  It will definitely be useful for those able to do post-trip travel to other parts of this equally massive country (the world’s sixth-largest — the U.S. is fourth and about 20 percent larger than Australia).

International Programs also has an old (2007) copy of the Sydney & New South Wales Lonely Planet guide, which might be useful for students to borrow temporarily at some point before the winterim trip. I’ll briefly review that book later, but there’s definitely a lot to like about the Lonely Planet Australian guides, which currently include both complete and pocket guides to Sydney, an East Coast guide, and others that might be worth checking out.

Many readers will indeed find Australia amusing; it contains descriptions that are whimsical, full of odd trivia, or otherwise entertaining.  The entry for Derby, on the northwestern coast of the country, starts off, “Late at night while Derby sleeps, the boabs cut loose and wander around town, marauding mobs flailing their many limbs in battle against an army of giant, killer croc-people emerging from the encircling mudflats … if only.”

Of course, such whimsy adds to the length of this tome, but most won’t mind, because it is indeed informative and educational.  It’s also well structured and formatted to help give quick answers to key questions many visitors will have.  What are the must-see, must-do sites? There’s a handy “Australia’s Top 25” list starting on page 10, topped by the Sydney Opera House and the Great Barrier Reef, with other sites in order on the following pages that are packed with beautiful color photos.  It’s a list that’s sure to entice.

That’s followed by a two-page “need to know” list with everything from basic weather info, sample currency exchange rates with a Web link for current rates, a list of other important government and travel links, standard institutional and business hours, and more.  Then comes a short section on updates in this guide — more likely useful for experienced Australian travelers and longtime fans of previous Lonely Planet guides — and a section with suggested lists for travelers with special interests from amusement parks to wine tours to luxury stays.  That’s just the beginning of the features.

The book has standard region-by-region and community-by-community lists and descriptions of area attractions. There’s plenty of emphasis on the kinds of things many students will enjoy when they’re not learning about the culture during planned class activities — nightlife chief among them, but also sports, the arts, and virtually anything else they’d be interested in.

In the final portion of the book, there are several chapters on Australian history, culture, the environment, and other major topics.  They’re written by additional authors not normally employed by Lonely Planet, such as the well-known writer and environmental scientist Tim Flannery. (Note: this is not the singer and former Major Leaguer Tim Flannery, although he’s pretty cool, too.)

There are plenty of maps, from the full-page or two-page, full-color ones of the the entire country or a major city or city section, all the way down to smaller two-color, simple maps of very limited areas that take less than an eighth up of a page.  A wonderful pull-out, folding map of Sydney is included in the back — obviously handy for scooting about Australia’s largest city.

The book’s formatting is pleasing, with plenty of clear section breaks and generous use of colored text, boldface, headers, symbols and other approaches to making information easy to find and easy to read.

There’s also all the standard info experienced guidebook users have come to expect: where to eat, where to stay, how to contact folks, what things cost.  This looks like a great guidebook.  The ultimate test for me is whether the writers have done an accurate and skillful job in truly guiding us to places that fit our tastes; until I’ve actually spent time in Australia, it’s hard to tell whether the 14 listed writers and researchers who contributed to this extensive work did the job I would hope they did.  I’m betting they did — and am really looking forward to finding out.

(As of May 7, Australia listed for US$31.99 on Lonely Planet’s Web site — $22.39 for its more interactive e-version — and $23.92 for the print and $17.99 for the electronic version on Amazon.com.  Be sure you don’t confuse it with other LP guides, such as Discover Australia.  International Programs has traditionally supplied a copy of this guide to all participants, but we will likely cut that as a way to save a small amount of money and let you choose your own guidebook.)