If you’re one of those rare souls who aren’t connected all the time but have yearned for a good electronic atlas, MAPS.ME may be the next best thing.

MAPS.ME gives wonderful detail and has a useful search function. (Sorry for the dark image — used another new app, Mobizen, for capturing the screen image but haven’t quite mastered the details.)

I’m one of the few who have yet to adopt a smartphone, but I do rely on my Nexus 10 tablet for a few things during travel.  The offline atlas that I’ve wished for may be here in its closest form with this Android app.

MAPS.ME is available for free in the Google Play store.  I also found it in Amazon’s Andoid App Store, but not the iTunes Store.

I’ve always been a hard-copy map guy.  The size and detail of an atlas or a laminated foldup map appeal to me far more than the miniature, highly focused capsules of the world given to us in a standard GPS screen, and I’ve seen too many folks who are slaves to their GPS while being completely unaware of their surroundings.

Being able to read a map and relate it to the surrounding landscape are far more pleasing than following the directions given to me by a dashboard.  While a GPS is handy, it’s just not as appealing to me as map whose details show you much more about your relationship to the larger world.

For a recent trip to Costa Rica — a compact country less than a third the size of Wisconsin but far tougher to figure out geographically — I searched unsuccessfully for an atlas but found MAPS.ME, which allows the user to download individual state or country maps for use offline. It’s a perfect complement to my Nexus tablet and its built-in GPS, which in Google Maps tells me where I am in a macro view but not with micro detail unless I download detailed maps for very limited areas — for instance, about half of Outagamie County if I’m planning a trip to the Appleton area.

With Maps.ME, I downloaded the entire Costa Rican map at a level of detail that includes individual sites and attractions.  It’s far more detailed than the laminated National Geographic map we’ve relied on for our last three trips to Costa Rica, and with the Nexus GPS that works in concert with it, we were able to use it twice to save us at least 15-20 minutes of travel time on trips. 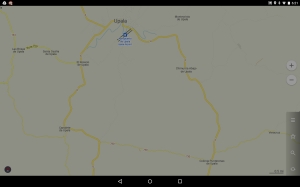 By taking the cutoff road (730) to the south of Upala, we saved about 10 miles and somewhere between 15 and 20 minutes on the trip through Colonia Puntarenas de Upala (lower right side of map).

First, when my wife was going to a class reunion with a classmate’s instructions, we pulled over at a crucial intersection to check the app.  The GPS showed our location exactly, and by looking at a couple of alternatives, I was able to determine that the route suggested to us was both longer and more mountainous than an alternative.  I convinced my skeptical spouse that we should trust the map, and less than 25 minutes later we were at our destination.

About a week later, we were headed back from the beach with some of our in-laws, who had chosen our route back to the family farm from their time-share on the Pacific coast. They’d been making that trip for many years, but when I showed my brother-in-law the map of the region we were in, he began to wonder if an alternate route would save us time and recalled that one of his relatives had taken them on one years earlier.

He decided to give it a try, despite the misgivings of our Costa Rican wives.  Because the road was numbered, he figured it should be relatively easy to travel.

It ended up being a good decision; although the road was unpaved, it was in good shape and probably saved us at least 10 miles of highway and town routes through a busy and confusing Costa Rican community.

For those who have never driven in Costa Rica, it’s useful to point out that very few important routes there are straight, flat, wide or lonely. Driving is always an adventure and often a delight that requires every last ounce of attention and usually nerve. Directions most often are given via descriptions of landmarks and distances. Once routes have been successfully used, they tend to be favored, often for years, which explains our wives’ reluctance to try something else. 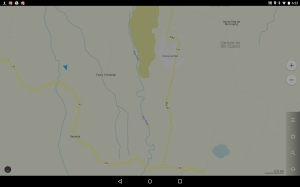 MAPS.ME works with GPS on the Google Nexus to show where you’re located (blue arrowhead — here, it’s on a farm without named roads, which explains the lack of detail on the map).

While in Costa Rica, I also downloaded the country map for Australia, which I used to look up places I had been reading about in Bill Bryson’s In a Sunburned Country.  Knowing where places are on a map, and what the area they’re in is like in terms of physical features and distance, is always enlightening.

I found the search function and level of detail for both Costa Rica and Australia useful and accurate.  I suspect the detailed street map of Sydney on MAPS.ME will be quite handy during my COMM 373 winterim class next year, as the San Jose map already has been for Costa Rica.

The app and its individual maps do take up a good bit of space — Australia is 168 megabytes, and Costa Rica was somewhere around 70 — but they work quickly and it’s hard to beat their functionality on the larger screen of my Nexus 10 tablet.

For those who want routing, MAPS.ME has larger maps that include directions. They seem to require about 60 to 70 percent more storage space on your device, but I haven’t downloaded any of those versions because I’m the kind of traveler who likes to figure out routes on my own with only the map to guide me.

Feel free to share your experiences with this or any similar app through the comment function; other travelers will value your input.