One of my goals this year was to camp more with my family. A way to make that happen is to write about it, so I have committed to a weekly column with the Portage County Gazette. Here’s most of my first column in its original state (but different photos).  The paper is redesigning its website, so direct links aren’t available yet; I’ll frequently post these a couple of days after they appear in the Gazette.  Feel free to share or send feedback either here or at the Gazette site. — Steve 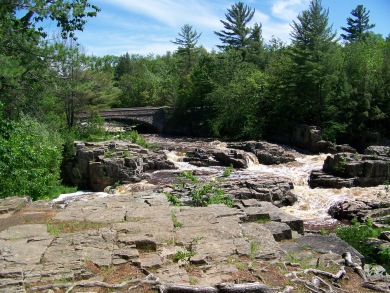 The old County Y stone bridge just above the Dells of the Eau Claire, taken from a rock outrcropping over the river a day or two after heavy rains in 2008 (personal photo, as are others in this post; click for larger view)

We camped in Dells of the Eau Claire county park recently, and it was hot. There were some college guys blaring a country station late one night, and the next night our neighbors’ child got cranky and kept folks up. Did I mention that it was hot?  Sticky, stinky hot.  I got stung on the head by a hornet. While everyone else went to the river, I sat around the campsite waiting for some friends to show up, and they never did.  We got some kind of tree sap or resin all over our expensive tent.  It was hot.

For every minor inconvenience of camping, there are 50 major glories.  Maybe a hundred, maybe a hundred thousand – but who’s counting?  We were camping, and that was all we needed.

At the Dells of the Eau Claire, as in virtually every city, county, state or national park in Wisconsin, the simplest pleasures of life are multiplied. The crispy, slightly blackened skin of a juicy and sizzling bratwurst brings even more sensory gratification while camping than it does at a Packers tailgate.  Although you’re not trapped in your kitchen, the invigorating, earthy, pungent aroma of morning coffee and the bubbling sounds of the percolator seem more pronounced, even though they, like you, have more room in which to roam. The constant smiles and laughter of your kids, the comfortable silences between topics of real conversation by the late-night fire, the shooting stars in spaces between tall trees overhead, the bracing chill of the water – for the cost of a night or two of camping permits, you get a priceless return. 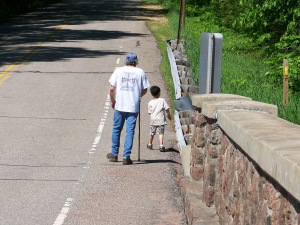 My brother Loren and son Sam walking along the old County Y bridge in 2008. The new bridge will have safer walking lanes and use the old stone on its façade .

And there’s no better example than the Dells of the Eau Claire.  This Marathon County park, still probably unknown to many Central Wisconsinites, is less than an hour away even if you take the slow and scenic route (through North Star, Shantytown, Pike Lake and Hatley).  A little north and east of Wausau, it’s best known, naturally, for its lovely dells on the Eau Claire River, which meanders through the area until flowing into the Wisconsin River just north of Schofield.

Our kids and their friends love to climb the rock formations in the river and walk high over the banks on the north side.  There’s a rustic, large wood pavilion for group gatherings, within hearing distance of the tumbling water.  There’s a nice playground, a swimming beach, and – best of all, for me – wonderful paths on both sides of the river that join with the Ice Age Trail.  It’s one of the best year-round trail systems in a region blessed with loads of them.

I will confess now to slightly exaggerating the woes of this particular weekend.  I sat in camp to wait for our friends not because somebody had to, but because it was a wonderful excuse to sit and read in the trees. The dells are a favorite spot for our family, and I’ve seen them enough that I didn’t need to move.  I’ll see them again – plenty, I hope.

It was truly a fine weekend – the excellent company of my children, wife and next-door neighbors, hearty food, very warm weather and very cool water, and time just to relax and forget.  The college guys toned it down after a friendly visit from a young park employee. The sting was nothing, as my friends will tell you I seem to have taken far worse blows to the head.

The highlight for me was my first real introduction to the Ice Age Trail, which passes through the park on the southern riverbank. Having awakened before the others on Sunday, I hiked about three miles out to County Road Z, where there’s a parking area and trailhead, and back.

Around halfway to the trailhead, outside the park, the trail skirts the river some just a few feet above water, with barely enough room for a line of trees separating the two. I was gently surprised by a whumping noise and an almost palpable percussion of air, then a slight whooshing sound. Departing from the tree just to my right, a bald eagle barely at eye level and no more than 15 feet away was beating its massive wings slowly across the river.

I tried to take note of my surroundings, and on the return trip I tried to fix the location in my memory. It may be somewhere near the boulders I called the “three sisters” because I have no imagination, not far from the first bench on the trail outside the park.  I probably failed to adequately map the place in my mind, but I don’t care.  I’ll just have to return more frequently.

We are fortunate to have such beauty in Wisconsin.  Bordered by two Great Lakes to the north and east, two great rivers in the St. Croix and the Mississippi to the west, and the rest of the United States to the south, we don’t really need to go past our state line if we don’t want to.  Nothing really surpasses the Wisconsin outdoors, no matter how wonderful it is everywhere else.

But we do need to protect what we have.  Many of our natural areas continue to be under attack, or are being threatened in new ways, such as elimination of tax funding for Wisconsin state parks or the lapsing of the federal Land and Water Conservation Fund.  Even when we’re out there trying to forget the rest of our cares, it’s not a bad thing to keep that knowledge in mind.

In the meantime, happy camping, everyone.

Jim Griesbach, commissioner of the Marathon County Highway Department, said the county hopes to have the bridge reopened to traffic by Nov. 13, in time for this year’s deer season, but that the façade won’t be finished until sometime in early summer 2016.  The original stone from the bridge, completed in 1927 by W. H. Fischer & Sons of Antigo, will be cut into veneer for the new bridge, giving it a rustic look and feel.

The bridge will also have walkways, making it safer and convenient for folks going from one side of the river to the other and between park and natural-area units.  Kudos to the department and Marathon County for their efforts on the bridge.

No kudos go to our nation’s political leaders for letting the Land and Water Conservation Fund lapse Sept. 30.  The 50-year-old program, funded with offshore gas royalties, may have been the single greatest provider of money for America’s spectacular outdoor parks and recreation offerings, providing everything from improved hunting and fishing, cleaner water, working forests, nature programs for urban youth, and, of course, fantastic parks.

The Dells of the Eau Claire County Park is just one of many Wisconsin treasures that have been helped by this fund; in 1967, $11,000 from this source went toward an addition to the park. In Marathon County alone, there have been 127 LWCF-funded projects over the fund’s 50-year life, costing about $515,672 – about $3.83 per person currently living in the county, according to the LCWF Foundation.

In Portage County, the impact has been even more substantial.  Over the 50 years of the fund’s life, 30 Portage County projects worth some $1.7 million, or about $23.82 per person currently living in the county, have been assisted by the fund.   Those projects helped develop Riverfront Park, Lake Emily Park, Dewey Marsh State Natural Area, Schmeeckle Reserve, the Green Circle Trail, Jordan Park, Standing Rocks, and numerous other projects – even softball fencing and the Mead Park playground.  That may be the best 23 bucks each we’ve ever spent.

But it looks like we’ll have to come up with other ways to support these types of projects, which have been, inarguably, an extraordinary benefit to all of us in Portage County and throughout Wisconsin.  More information on projects funded in Wisconsin is available at this link.