Seeing clearly often means going directly to the source, and when it comes to native Wisconsin terminology, there’s none better than one of our few remaining speakers of the Menominee language.

A couple of months ago, I wrote about a hike on the Waupaca River segment of the Ice Age Trail and devoted two short paragraphs to the puzzle of why the Waupaca River is named “Tomorrow” on its upper half. In doing so, as I noted in a later column, I passed on some incorrect information regarding the meaning of the Menominee word “waupaca.”

The mistake did give me, however, a chance to visit with Mike Hoffman, a Menominee elder who is one of perhaps a dozen remaining fluent speakers of Menominee. We conversed over coffee in June to talk about the Waupaca, among other things.

Trying to get to that place

The dual-named river is the result of a great deal of storytelling and misinformation. Incorrect or inaccurate interpretations of the name are published in multiple places, including the main web page of the Waupaca Historical Society (which notes that it is a Menominee word meaning “tomorrow” or “pale water”).

While the word is related to other Menominee words dealing with seeing, light, and the new day, it has little or no relation to the amount of time it takes to navigate the Waupaca (often reported, as I did, to be about a day – thus “tomorrow”).

The real, literal meaning, according to Hoffman, is “place of tomorrow where it is seen clearly.”

Mike is a fascinating guy who serves as a consultant on Menominee culture to the University of Wisconsin-Stevens Point Museum of Natural History, which has a well-known collection of wood figures depicting Menominee clans and their origin story. 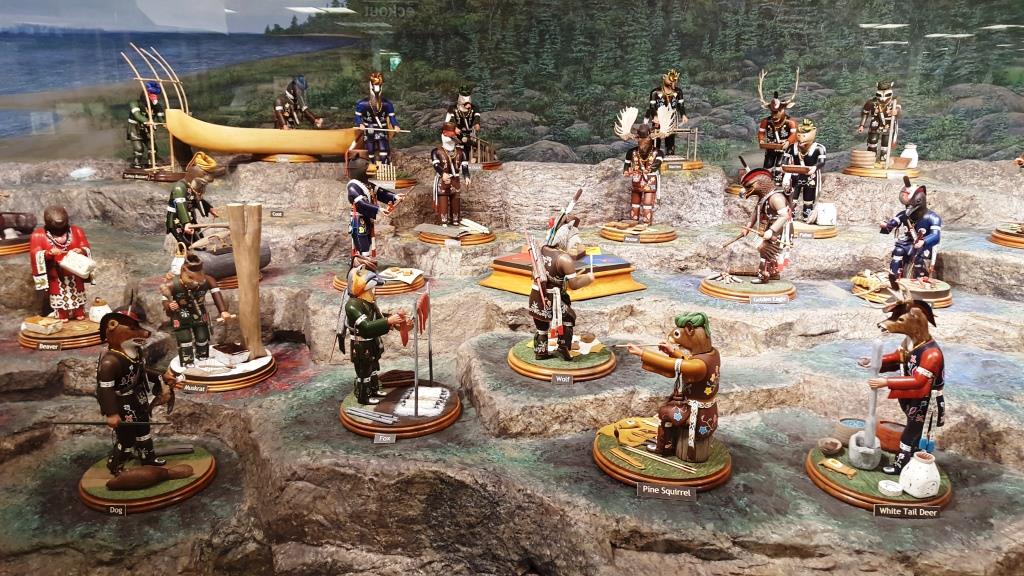 It’s easy to see how people can become confused or put their own interpretations onto the words of others. That becomes more likely when a river has two names, as the Tomorrow/Waupaca does (it’s “Tomorrow” in Portage County, according to the Department of Natural Resources, and “Waupaca” in Waupaca County).

The sun, sunlight, and the greeting of each new day have substantial significance in Menominee and other indigenous cultures, according to Ray Reser, an archaeologist, paleoanthropologist and director of the museum. That’s among the reasons why the name of the Waupaca is an important issue to Mike.

The opportunity to meet Mike was not one I took lightly. Although I’d spent a great deal of time as a youth reading about native peoples, primarily those of the Great Plains, I needed more than a refresher course. Before our coffee, I spent a bit of time reading about not only the Menominee, but other major Wisconsin native groups, including the Chippewa, Ho-Chunk, and the Sac and Fox.

I was unaware that the Menominee had been officially “terminated” – the legal phrase for losing their legal status as a tribe, which occurred by an act of the U.S. Congress in 1954.

Their status was later restored.  Still, it’s a pretty scary thing to consider that our cultural heritage and identity is subject to the whims of a bunch of politicians, especially today, when the intellectual flow of many of them wouldn’t take 24 seconds to navigate, much less 24 hours.

The conversation with Mike ranged from the woeful state of historical records on the Menominee language (especially in our university libraries) to traditional bow hunting (which he practices) to the history of various tribes.

I’ve always been at least vaguely aware of the history of native peoples in Wisconsin and often find that history to be an interesting part of my outdoor experiences – such as learning last fall that numerous Potawatomi had settled the area around Powers Bluff in Wood County, whose winter-sports facilities I wrote about in January.  That’s another subject Mike and I discussed.

Having the chance to talk to Mike rekindled my interest in reading about place names and native cultures. As I continue to explore our state, it also encourages me to consider more carefully our local and regional history, as when we saw a dugout canoe at Ishnala Supper Club near Mirror Lake State Park just last week.

The supper club intimates the canoe is of Winnebago origin and that Ishnala means “by itself alone,” a reference to a point of rock extending into the gorgeous lake.

Mike and Ray collaborated on a beautiful work, a map of Menominee place names, which soon should be available for sale at the museum gift shop.  I’d highly recommend this for anyone interested in Wisconsin history and landscapes and in helping Menominee remain a living language.

So what does it all mean?

My misadventure with the name of our regional river reminds me of the value of considering our shared human culture and history.

My family and I are not of Menominee or Winnebago blood, although we have a small amount of Cherokee and indigenous Central American from way back.  But our love of the outdoors, of the places that native people cherished and cared for, gives us at least one very important trait in common.

Ed Abbey, who in addition to being a curmudgeonly nature writer was a philosophy graduate student with a keen interest in language, wrote in an essay called “Desert Images” that language seeks to “grasp the thing that has no name.” In considering pictographs and petroglyphs of the desert Southwest, he wondered if the natives who left them felt “the same impulse to toward permanence, the same longing for communion with the world” that we feel today.

“To ask for any more meaning may be as futile to ask for a meaning in the desert itself. What does the desert mean?  It means what it is,” he wrote. “It is there, and it will be there when we are gone.

“But for a while we living beings– men, women, birds, that coyote howling far off on yonder stony ridge – we were a part of it all. That should be enough.”

We cannot care too much for nature.  Likewise, we cannot value enough the presence of people like Mike Hoffman in bringing more light to our names and experiences in understanding nature, culture and history.

Author’s note: This is my July 28th Portage County Gazette column, which hasn’t been published online yet.  Permission to share photographic images of Menominee spirit figures courtesy of Mike Hoffman and UWSP’s Museum of Natural History.