The holiday-weekend photo of a corpulent governor lounging on a New Jersey state-park beach, closed to the general public through government shutdown, seems an apt metaphor for both our political and natural environments.

Greed can be described in many ways. A pithy one is, “He would skin a gnat for its hide and tallow.”

Aldo Leopold, a great adopted Wisconsinite, had the rare ability to go both short or long when describing our relationship to nature.  He said, “Industrial landowners and users, especially lumbermen and stockmen, are inclined to wail long and loudly about the extension of government ownership and regulation to land, but (with notable exceptions), they show little disposition to develop the only visible alternative: the voluntary practice of conservation on their own lands.”

Whether one’s preference is brevity or a more drawn-out elegance, we see that selfishness and lack of community spirit keep business, government and individuals from working together on important things in life.

Public lands, Leopold, limited access, and pesky little critters are this week’s topics while recounting  another jaunt along a section of the Ice Age Trail.

It’s not often that a place where somebody lay down to die becomes a major part of an outdoor experience, but that was the case last week when my friend Chris Sadler and I set off on a road walk in Sauk and Columbia counties.

We were at the Aldo Leopold Foundation headquarters – a location more familiar as the farm where Leopold reconstructed a chicken coop as “the Shack” and set about to rejuvenate a couple hundred worn-out acres on the Wisconsin River between Baraboo and Portage.

We had arrived early enough to tour the farm and Shack – $15 guided, $7 self-guided– but were anxious to start our walk of 12 miles (or thereabouts) from the farm to the Fox River.

Still, we took a quick look around the headquarters, including the portion where a small garden and memorial to Leopold were constructed. Near there, he had suffered a heart attack while fighting a grassfire advancing from a neighbor’s property.

He lay down, apparently hoping the attack would subside, but it did not.

Leopold was, of course, a pioneer in wildlife management and the author of A Sand County Almanac.  His best-known idea, “the land ethic,” is one we should play back at high volume, preferably with as many world accents as possible, to those plundering our natural resources and limiting public access to land.

After locking them into a non-restored chicken coop.

That’s a digression, I think.  In any event, we set out along Wisconsin Rustic Road 49, just inside the eastern border of Sauk County, and headed east for Portage.

Depending on which of two Ice Age Trail resources I use – a freely available spreadsheet with the length of each trail segment on it, or the IAT Alliance’s “Mammoth Tracks” app – the walk would be somewhere between 10 and 12 miles. Regardless, after setting off shortly before noon, I figured we’d be in Portage for a very late lunch or early dinner.

Road miles, being generally more straight and flat than trail miles on the IAT, can go by quickly, but we didn’t count on the day’s warmth and bugs sapping us as they did.

Although the temperature barely reached 80, the humidity made it more uncomfortable and a partly-cloudy sky only did so much to keep the sun’s rays from reflecting off the road surface.

We went almost halfway down RR 49, also known as Levee Road, before our first stop at a shady spot in the road. The two small three-legged stools I brought felt great in getting us off of our dog-tired feet, but gnats and mosquitoes kept us from resting more than three or four minutes.

Just up the road, a gravel parking spot with an open vista across the marsh to the south had enough breeze to rid us of the bugs.  We sat again, eating a light lunch with the sounds of Interstate 90 traffic for background noise.

Truthfully, this IAT connecting route will probably end up being among my least-liked. Although there are many stately trees along the rustic road and very few houses, the woods and the levee keep walkers from seeing the river for virtually the entire length from the Shack to Wisconsin 33 south of Portage.

There’s no maintained path along the levee (much of which is private property anyway), so a summertime walk atop it is more likely to bring tick attacks than improved scenery. Autumn or early spring, with their lack of pests, would be far more pleasant.

Passing under Interstate 39, we soon arrived in Portage, and after crossing the mayfly-spattered Highway 33 bridge over the Wisconsin, we walked through a pleasant neighborhood on our way to the point where the IAT meets up with the historic Portage Canal, which joins the Wisconsin to the Fox.

The couple of miles between canal endpoints is the difference between going downriver on the Wisconsin to the Mississippi and Gulf of Mexico, or on the Fox toward Green Bay, the St. Lawrence and the Atlantic.

As we walked through the neighborhood, a homeowner tending his yard engaged us in conversation about our hike and thanked us for visiting. Later, where the trail left a city street and went along the back of several private properties, a gentleman on a riding mower waved as we crossed his backyard.

Chris remarked on how friendly Portage folks were, as we had stopped for soda at a local sports bar and talked a few minutes with the waitress there, who turned out to be an entering student at UW-Stevens Point.

The walk through Portage is indeed friendly and interesting. The old canal is especially fascinating, as the city has developed walkways along its length and visitors still see rotting wooden posts and rails that helped guide water traffic on the eastern length of the canal.

Visitors also see the lock and gate on the western end before walking along another levee, which is actually a departure from the IAT but heads in the same general direction.

After our soda break, we walked the final two miles, which were miserably buggy and almost ruined the scenery. Flying pests did lend a southern-swamp feel to our hike through woods along the southern canal bank, and we had to break off some leafy branches to whisk the little creatures away.

Soon we were at the end of the Portage Canal segment, which used to give way to the Marquette segment, where a four-mile stretch along the Fox was part of a handshake agreement between a former landowner and the IAT Alliance. That route has been moved to connecting roads on the east side of the Fox. 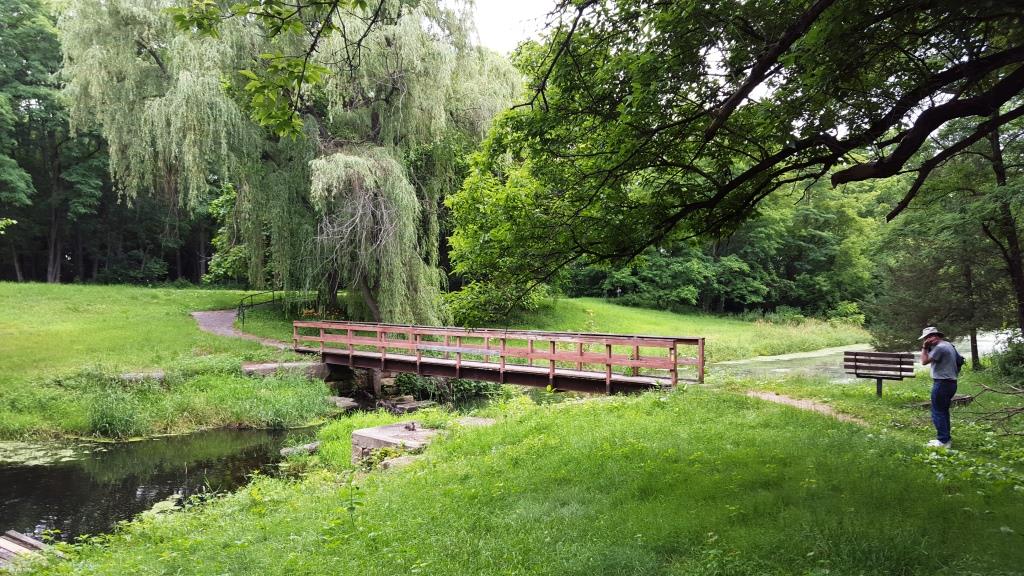 Near the Fox River

Built by Boy Scouts in the 1950s, according to the Fox Wisconsin Heritage Parkway group, the non-accessible trail stretch has been closed since 2014 because a new landowner didn’t quite share the community values of teenage scouts or Aldo Leopold.

That doesn’t mean the owner can’t be convinced, but it may take some effort.

Maybe we’ll eventually get that trail back, whether by large steps or small.  As the proverb goes, gnats, in great number, can beat an elephant.

We parked both at the Historic Indian Agency House near the Fox River and the Leopold Foundation.  We couldn’t visit the Agency House, but it includes a museum, a garden, interpretive trail and 225 acres of natural area.

We liked our soda stop at the Corner Pocket in downtown Portage enough to revisit for dinner (slightly early, but not as early as we thought).  They had a unique selection of tap beers, including both a Potosi and a Shiner (from Texas), although we stuck with Ale Asylum’s Hopalicious.

Chris enjoyed his Italian beef sandwich.  My “Chuck Norris burger” was an angus patty between two grilled-cheese sandwiches with barbecue sauce, onion rings, jalapeños, and pepper-jack cheese. The Texas-toast slices made the sandwiches too thick and I think it may have been American cheese, although there wasn’t enough to tell, so it was too bready and not particularly cheesy.  I had to eat it in parts and, at $13.50 – a price that would have turned me off had I noticed – I can’t say it was worth it, although the beef was excellent.

The Corner Pocket was good enough to recommend, but I’ll look for a new place to try on my next visit.

Author’s note: This column originally appeared in the July 7 edition of the Portage County Gazette.