Whether or not you’ve been following the story of the downtown Stevens Point seawall, this video is instructive.  I’ve argued that there was a clear mandate from citizens attending the July 20 Stevens Point Common Council meeting about this issue, and the video below is a very accurate  summary of how things went.

As I’ve noted before, not a soul who spoke — and there were a dozen — thought this was a fair assessment, including those who don’t live in the former floodplain and aren’t being assessed. 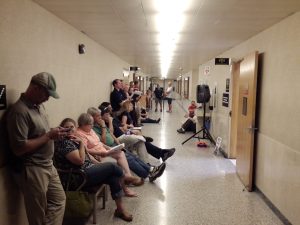 Early in the meeting, the halls  outside the council chambers were filled with overflow; not visible are citizens lining the wall at the far end of the hall or the walls along the hallway that enters this one from the right. (personal photo)

The opening shot of folks standing in a hallway doesn’t do justice to the crowd size early in the meeting (it started at 7 p.m. and ended around midnight, with the seawall issue being taken up shortly past 10 p.m., after many interested parties had left).  Somewhere between two and three dozen were sitting, standing and leaning anywhere they could at various times during the early hours of the meeting.

Regardless of how anyone feels about who should pay, this clearly sets a precedent about how the city approaches special assessments — even though the decision also breaks precedent set three years ago on a similar project for McDill Pond, for which the city and Portage County put up a third of the costs each.

Did it make a difference that McDill is on the edges of a much more affluent neighborhood?  Good question.

The city has portrayed the seawall as a “you benefit, you pay” situation to a subset of property owners and ignored the benefits accruing to the entire city. Rhetorically, it was a great strategy, but most people who follow the issue closely and examine all the facts should realize the city approach was a dramatic oversimplification of the issue.

Some city staff and council members like to compare the seawall to sidewalks (which individual property owners are responsible for), but the issue is much more complicated.  The seawall is more closely akin to the Hoover Avenue project in its impact on the economy and public safety.

The new precedent for assessments appears to be that if the city has an easy target, it will take aim.  That’s not a comforting idea to those with fewer political and economic resources.

In any event, it’s important for all taxpayers — especially less-powerful individuals who don’t have the resources of a large corporation or a city staff — to realize how decisions are made.  A summary like this is a good start for those who haven’t followed the issue as carefully.

Although this issue may seem dead to many folks, I’m posting this because the lessons from it are clear:

In any even, there may still be more news regarding this issue in the near future. Stay tuned and please stay involved in your local governance.

Kudos to Mike Richards for producing this video. from shooting to editing.