END_OF_DOCUMENT_TOKEN_TO_BE_REPLACED

Here’s an interesting article from Bloomberg Business, announcing that fossil fuels are just that — a relic of the past — and that renewables have brought us to the only future we can feel comfortable about.

Whether the publication is more conservative or more liberal is beside the key point here. It’s a business publication, and its core audience is concerned about business success.  That makes this brief analysis more than worthwhile.  It has an important message that we’ll all need to hammer into our so-called leaders, again and again and again.

END_OF_DOCUMENT_TOKEN_TO_BE_REPLACED 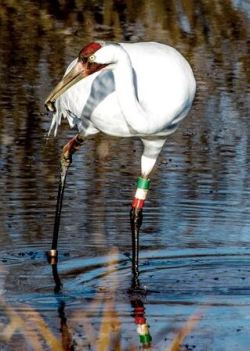 I got to experience both this past Sunday.  I went birding — running around Wood, Juneau and Adams counties with a couple of friends and a three-legged St. Bernard dog on a search for who-knows-what and finding plenty of it.

By that I mean that I’m not sure I can convey very well what happened in the six or so hours we were wandering central Wisconsin. Normally that’s reason for me to puzzle something out until I can articulate every last detail, but in this case it didn’t matter what I did, and I had a grand time doing it.

My gracious hosts were Tim Krause, Christina Streiff and Mollie Bigdawg Krause (the aforementioned St. Bernard).  They had agreed to let me hang out with them while they went on one of their many trips around the state, often in the form of daylong excursions each Saturday and Sunday when they have no other plans.

END_OF_DOCUMENT_TOKEN_TO_BE_REPLACED

Whether or not you’ve been following the story of the downtown Stevens Point seawall, this video is instructive.  I’ve argued that there was a clear mandate from citizens attending the July 20 Stevens Point Common Council meeting about this issue, and the video below is a very accurate  summary of how things went.

As I’ve noted before, not a soul who spoke — and there were a dozen — thought this was a fair assessment, including those who don’t live in the former floodplain and aren’t being assessed. END_OF_DOCUMENT_TOKEN_TO_BE_REPLACED

This might be the most-circulated of all Gary Larson cartoons on the internet (search Google Images for “larson blah blah” — it’s astounding). But maybe that’s because this so aptly summarizes so many situations, including Monday’s common council meeting.

Participating in the July 20 Stevens Point Common Council meeting as a citizen was like trying to swim from the downstream side of Hoover Dam to the upstream side. Even if you’re strong enough to go against the current down at the base, you’re not going to get past the dam shaft.

I’ve watched many Point council meetings on video, but I’d never attended one until Monday.  What I saw convinced me that, at least for now, many of our so-called local leaders are great at pinching pennies but don’t recognize good sense.

They still couldn’t figure out how to help the residents of Edgewater Manor.  They also rubber-stamped an opportunistic shafting of more than 200 homeowners in the former FEMA flood plain, who are being required to pay for seawall improvement near downtown Stevens Point.

The council’s peformance could be described in many ways. I may have a lot more to say about this, and perhaps other council issues, in the future. For now, I’ll just say that the council and the city of Stevens Point only seem to hear what they want to hear.

This was particularly true on the flood-control assessment issue. I don’t think I’ve ever seen a decision-making body get such a clear and unanimous mandate from its constituents, yet seem to care less about what any citizen said.  The homeowners stuck with the bill made their hardship clear; other citizens strongly affirmed their willingness to share the cost as a city and thought the rest of the city would be willing, too. The consensus was as solid as a concrete seawall. END_OF_DOCUMENT_TOKEN_TO_BE_REPLACED