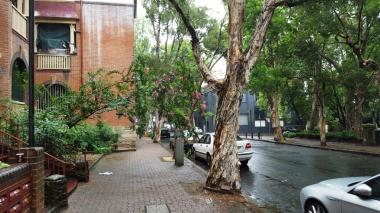 These photos represent a spectrum of the open, green, urban spaces I found in Australia during our first week or so of the recent trip Down Under by UW-Stevens Point’s COMM 373 (Communicating Social Change) class.

I was fortunate to be able to chronicle the trip through my Portage County Gazette column. The first of four weekly posts from Sydney and the surrounding environs is linked here.

Read on to see the photo gallery.

Despite being a city of almost 5 million, Sydney is a place where it’s easy to find a tiny oasis of your own for a few minutes or enjoy a more expansive public park.

Several people have asked to see more photos, so I’ll put together galleries to go with my backlog of Gazette links and get them published as I can over the next couple of weeks. It takes a little time to cull, organize, compress, research caption material, and sometimes edit the photos for contrast and color, but I’ll get to all of it eventually.

On our very first trip to the Redfern train station together, we got a taste of the color and greenery we’d see throughout our stay.

A worker watering flowers outside Hyde Park Barracks in the Central Business District.

The anchor from the HMS Sirius in Macquarie Place Park. The Sirius was flagship of the First Fleet, sent to colonize Australia.

I couldn’t find the name of this pedestrian mall bordered by Alfred and George streets, across from the Four Seasons Hotel near the harbor.

Students enjoying a quiet moment after breakfast at Strickland Park, a tiny neighborhood park near our hostel in Redfern.

Northam Lake in Victoria Park, a short walk from our hostel in Redfern.

Steps leading from Victoria Park toward the eastern entrance of the University of Sydney.

Inside the University of Sydney’s Quadrangle, looking toward the Nicholson Museum.

A view toward a pocket park south of the terrace outside the Nicholson Museum, part of the main quadrangle at the University of Sydney.

A closer view of the pocket park near Nicholson.

This is a small open space on George Street, overlooking First Fleet Park on the harbor, just 50 meters down the road from the elevated train tracks and the elevated Cahill Expressway above that.

Even in the heart of downtown, from a train station at Circular Quay that is below the Cahill Expressway, one can see Sydney Harbor and green space.

The weather was spectacularly nice in general, so we got great views all over Sydney. This vista of downtown is from the top of the Dame Mary Gilmore Reserve, sandwiched between a neighborhood (below) and bus top on the Cumberland Highway in West Pennant Hills.

Residents make their oases where they can. This is an alley in Darlinghurst.

The many varieties of gum trees are ubiquitous in the city and around the country. This is near UNSW in Darlinghurst.

From everything I could tell, this is a piccabeen palm, located on the campus of the University of New South Wales, where we visited some of the art facilities and learned about Aboriginal art.

Banners for Sydney’s spectacular New Year’s celebration were all over the Central Business District. It is indeed a city of color — especially green.

2 thoughts on “Weather down under”