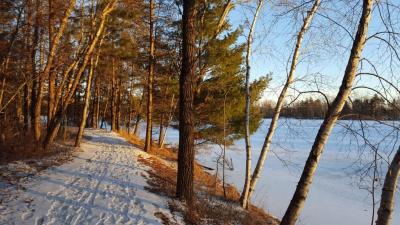 It’s been so cold lately that I’ve stayed inside more, nursing a tweaked knee and reading about important scientific findings I can use to convince myself to go back outside.

Some knowledge is harder to relate to outdoor recreation, such as the piece I read about Ocean Alliance researchers using drones to collect whale mucus.  No kidding – they use what they lightheartedly call a “snot-bot” to fly over whales spouting on the surface, as it’s a non-invasive way to collect the expectorations of the great mammals in order to study their DNA.

I also ran across a surprising amount of research about camping’s positive impact on circadian clocks and human sleep patterns. This included pieces hypothesizing that as little as a week, or even just a weekend, of camping can improve our sleep by returning us to patterns closer to natural cycles of light and dark.

The article that really stirred me from my lethargy, ironically enough, was one indicating that barley farmers are increasingly unable to grow that crop because of changing climate conditions. The report indicated many barley farmers, whose growing area has become increasingly limited to areas just east of the Rockies, are understandably loathe to discuss such change, as they don’t wish to believe either that it is happening or that we might just possibly have something to do with it.

A primary take-home from the story was that erratic barley production could have a dramatic impact on my favorite indoor reward for a good day of outdoor recreation.  Oh my gosh, I thought – no more beer?  I better get hiking, pronto.

It’s not quite that bad, of course, but that story in particular, along with a couple of local news items, got me to thinking about change, as well as heading outside to consider some of the changes in our local recreation scene.

It’s not really bad news, but neither is it good.  One of our most influential local leaders when it comes to the outdoors is retiring.

While Gazette editor Heather McDonald covers this story more thoroughly elsewhere in the paper, it’s worth repeating that Portage County Parks Department director Gary Speckmann, whose last day on the job was Jan. 13, will be missed.

Gary’s not one to talk about himself a lot, but others are willing to put in a few good words. Tom Schrader, director of parks, recreation and forestry for the City of Stevens Point, notes that governmental entities sometimes have the reputation of not working together well, but that was never an issue when it came to city and county parks departments.

“Gary and I never had a problem between ourselves in getting things done,” Tom said. “We just figured out a way to get it done, and we got it done.”

Much of that work was on our beloved Green Circle Trail, for which Tom sat in on the original informal working committee that got together starting in 1983 and got the Green Circle established.  Gary didn’t come along until the early ‘90s.

Jim Bucholz, director of Schmeeckle Reserve, has worked with Gary since the early 2000s, especially on projects related to the Green Circle, which is headquartered at Schmeeckle’s visitor center.

Although the Green Circle’s history is more closely associated with a half-dozen influential Stevens Point supporters who were there since the beginning, Jim said none was more important than Gary.

“He was always the person who got things done for the trail,” Jim said. ““He figured out where it would go through specifically, what materials would be put down, and how it would be maintained.

“His hard work and determination made the trail happen.”

While we’re on the subject of change, I realized last week that I hadn’t been over to Schmeeckle for too many weeks, so I went to check out some of its most recent evolution.

This past summer’s storm damage, which hit the southwest corner of the main portion of the preserve particularly hard, has spurred the preserve’s effort to go back to the future. 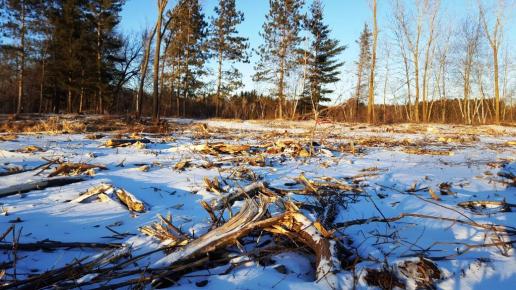 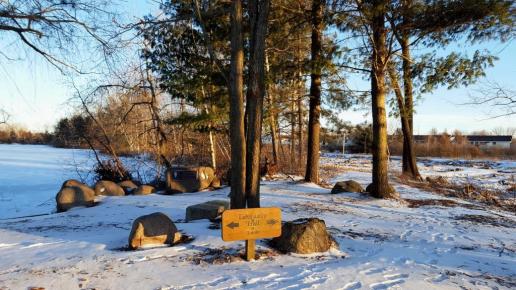 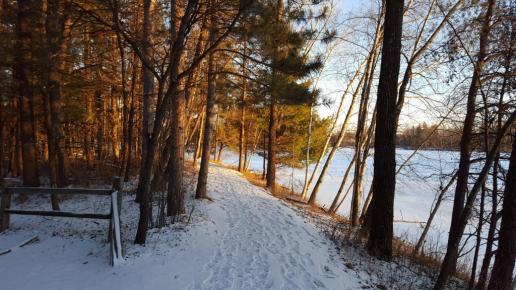 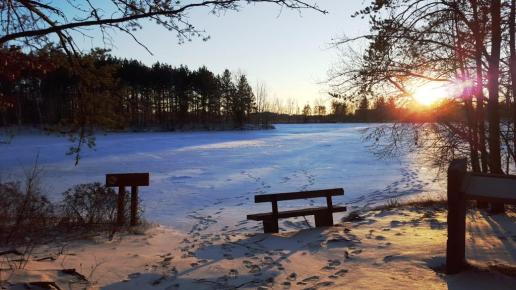 Jim said much of the area bordered by Michigan Avenue, Maria Drive and Lake Joanis is being restored to forest more native to the era before human development. Many of the trees that were in the area were aspen reaching the end of their life span, and the reserve was having difficulty with them toppling because of a lack of support in the moist soils – even before the storms wreaked their havoc.

Contracting with a commercial company in October to clear out the land  avoided what would have taken reserve staff and volunteers around five years to do, Jim said. Incidentally, the company cleared the land for no charge in order to pulp much of the wood it harvested.

After a grinder was brought through in November to chop up remaining slash, shrubs and other leftovers, the area may now look like a bit of a war zone to some, but that’s just setting the stage for the final step before replanting.  Spring herbicide application will help control invasive species, especially buckthorn, and then the reserve will plan native grasses and 550 native trees.

Jim said fast-growing white spruce and cottonwood will be the first to reach good size in the moist conditions around the lake, while swamp white oak and basswood will grow more slowly but provide good diversity.

All of the trees and native grasses will be more suitable to the environment, and other species like yellow birch will help provide a setting that will be diverse, colorful and somewhat more parklike than the farm that became much of the reserve we visit today.

It may take a while, but we’ll eventually see what the area looked like before settlement came to the area.

In the meantime, we can continue to look forward to the fall opening of the reserve’s new amphitheater. Replacing the reserve’s existing stage and campfire area, the 200-seat project has become necessary as the reserve’s programs have grown in popularity, often drawing hundreds or even more than 2,000 visitors for events like its twice-yearly candlelight hikes.

The Friends of Schmeeckle Reserve kicked off the effort with fundraising projects beginning in autumn, and the group received a large boost toward its $110,000 cash goal with a $5,000 grant awarded to it Jan. 9 by the Stevens Point Area Tourism Development Committee.

The remainder of the estimated $235,000 project will be funded through in-kind contributions – services and materials.  Construction should take place this summer.

Sandstone seating, a timber-framed stage and native landscaping should make the new presentation space blend in nicely with the reserve’s landscape. It will certainly improve the visual and aural experiences of visitors, who will no longer have to crowd around smoky campfires or small demonstration spaces during highly popular events.

I didn’t get as far as that location on a Friday-evening jaunt around and partly across Lake Joanis, as I started and finished at the clear-cutting area, circumnavigating the field of ice.

The late-afternoon sun made for wonderful picture-taking, even in the area that, after the timber harvest, seemed closer to a moonscape than a forest.

I did spy one other walker in the reforestation zone, but it was easy to see from the relatively light snow of the previous day that plenty of visitors were still coming through that stretch of the reserve.

It was a pleasant time spent getting new photographic perspectives on several spots I’ve already shot over the years – trees leaning out over the lake’s northern edge near a trail juncture, benches across from the island in the lake.

I vowed not to stay away for so long again, and indeed returned for a short walk with my wife at mid-day the following Sunday. She wasn’t quite thrilled with the idea of ambling across the lake that had clear (but small) cracks from the previous week’s brief thaw, and the muted booming sounds of water and ice moving imperceptibly but audibly below us inspired her retreat back to shore.

Fear of impending disaster can do that. But controlling and harnessing our concerns can also spark good changes, and as long as we see at least some positive transformation going on, it’s cause for celebration.

We can all drink to that.

This post originally appeared in the Jan. 19, 2018, edition of The Portage County Gazette.