Frequent hiking buddy Chris Sadler and I were reminded of the need for winter preparedness during a not-so-well-planned trip to hike the Turtle Rock Segment of the Ice Age Trail last week. We set out to knock a few more miles off the IAT, but Chris forgot to prompt his hiking buddy to prompt Chris to bring the paraphernalia required to negotiate the trail.

I suppose I could blame any addle-brained behavior on my part to osmosis. After all, it was Chris who spent the previous three weeks in South Carolina, where temperatures in the 40s apparently cause most of that region’s population to hole up, barring their doors until everything blooms again and they can hear ice cream trucks jangling down the street.

Truth be told, this was just one of those trips where I agonized over a destination, and thus never picked one until shortly before Chris came to pick me up. I asked when he arrived if he’d brought snowshoes, and because he hadn’t, we decided to skip them.

He did wear boots that rose several inches higher on his calves than my hikers do, so he clearly was more prepared than I.

Our target, the Turtle Rock trail section, runs west from Grandfather Falls on the Wisconsin River near Merrill for five miles. We had hiked a segment on the east side of the falls (named the Grandfather Falls Segment) in November, enjoying the rugged, riverine landscape enough to target a return for more trail on the other side.

Better have a backup plan

Arriving at the hydroelectric power plant on the east side of the Wisconsin, where we had started our previous hike, we parked Chris’ vehicle and quickly tested the snow in woods just outside of the parking lot.

Although it had snowed that week, we expected the unseasonable warmth from earlier in the month to have sufficiently decreased the snow’s base so that we could navigate it without difficulty. 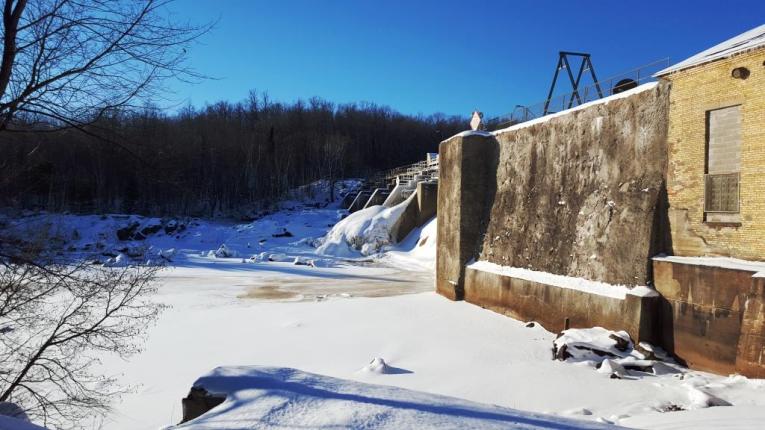 What we found at the falls was enough to cause doubts, but we drove my car to the western trailhead for Turtle Rock and started walking back east on the trail anyway. Initially, we had no issues – probably because a Lincoln County skiing trail coincides with the first quarter-mile or so of the Ice Age.

When the two diverged and the walking path suddenly had us sinking more than half a foot into the snowpack, we decided Plan B was in order.

Doubters may wonder what good Plan B is when Plan A is clearly so bad, but I really did have a backup.

That was the Merrill School Forest, a short out-and-back segment on one of those odd stretches of the IAT where things just kind of wander about.

A driving comparison would be that this general area of the trail is like going from Amherst to Marshfield via Stevens Point and Wausau, with a southbound detour to Plover before doubling back toward Wausau. The Merrill School Forest would be akin to driving down McDill Avenue from Post Road to Crossroads Commons and back – no cheating by using I-39.

In other words, it’s a route that seems about as well conceived as my preparations for our hike that day. But we all know that old saying: it’s not the destination, but the journey.

Trail planners knew what they were doing.  The Grandfather Falls segment makes up in beauty what it lacks in directness, and I’d heard good things about the Merrill School Forest, too.

After re-parking in a lot just outside the main entrance to the forest, we got on the trail, which follows a charming stretch of Ripley Creek. Even though we didn’t get to do the Turtle Rock segment, the school forest was a grand substitute, another day in a wintry paradise.

No matter how much I get out in the winter, snowy scenery never gets old. That’s especially true on a well-lit day with a curving, climbing, dipping path through the woods and near bodies of water.

And we had picked a perfect day, with bright sun and temperatures in the high teens.

Any wind was cut off by the steep sides of Ripley Creek’s small dell, which encouraged dawdling and photos of snowy branches, trees that stood or leaned or lay at all angles, white-powdered bridges across the creek, and other seasonal scenery.

The trail meandered along the creek, eventually heading upward toward a large meadow and more forest. During warmer months, the meadow apparently can get overgrown and make some hiking slightly more challenging, but in the dell the trail is well-blazed and was easy to follow.

Above the creek, it mostly followed a groomed skiing path. The trail is on just one portion of the 10 miles of other mowed and maintained trails in the forest, which is open to the public year-round. About half the trails are groomed for cross-country skiing.

“See? Told you this would be better.”

Even though our hike was far shorter than what we expected starting out, there were plenty of highlights beyond the forest’s general loveliness. One was taking a lengthy break inside the forest’s Cordwood Education Center, a mini-museum and warming house full of stuffed wildlife. 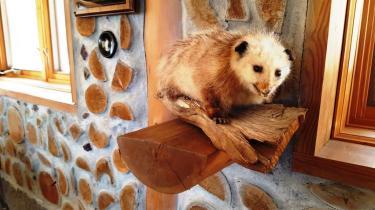 With large picture windows for gazing at surrounding scenery, the building tempted us to stay all afternoon.

Outside, we scouted one of several bobcat traps that are part of a study. The forest encourages visitors to check out the traps and report to staff if a bobcat is inside one of the cages.

We didn’t get to see a cat, although Chris reported seeing what could have been bobcat scat. Later, we ran into a class of students led by forest director Russ Noland, who told us a trail cam took video of one feline who was temporarily caught.

Russ said the wily creature finished off its snack and then calmly manipulated the mechanism latching the cage until it freed itself.

An outgoing guy who’s an obviously adept promoter of the forest, Russ invited us to a weekend public event that included food, demonstrations, skiing, hikes and other activities. We couldn’t make it back, but the Merrill School Forest has so much to offer that it, like so many other places we’re blessed with in Central Wisconsin, will be worth later visits.

It looks like a must-see for families in particular, and its educational mission means there are always plenty of worthwhile goings-on. The facility is about 11 miles north of downtown Merrill on Highway 107, just across from Camp New Wood Park.

It also was fun to watch the young skiers strung out along the trail – some already skilled, and others trying cross-country for the first time. Their excitement at being outdoors was contagious, even though we already had caught the bug.

One cute, very polite and slightly aggravated-looking girl, by herself and trying to catch up to those ahead of her on a small upslope, had fallen and was trying to get up while straightening out her skis. “Could you please help me?” she called, gratefully receiving aid and advice and clearly determined to use them.

She reminded me of my own first attempt to conquer a small grade that I now view as laughable. Back then, I was lucky that those assisting me overlooked my utter lack of cuteness.

Although the Ice Age guidebook and other sources say the IAT segment through the school forest is only one mile from west to east, it seemed like more. Perhaps that’s because we were in no hurry.

The combination of a path that had already been trod or groomed throughout the property meant we had no snow issues.  We were particularly careful to stay off of the groomed ski tracks, but I don’t know whether that vigilance or the general pleasantness of the day made the trail seem longer.

Perhaps it was more that the school forest’s beauty made our visit one of those time-standing-still outings.  Although we also revisited a small portion of the Grandfather Falls segment, the forest was what really made the day perfect.

In retrospect, I guess we didn’t want those snowshoes after all.

This post originally appeared in the Jan. 26, 2018, edition of The Portage County Gazette.