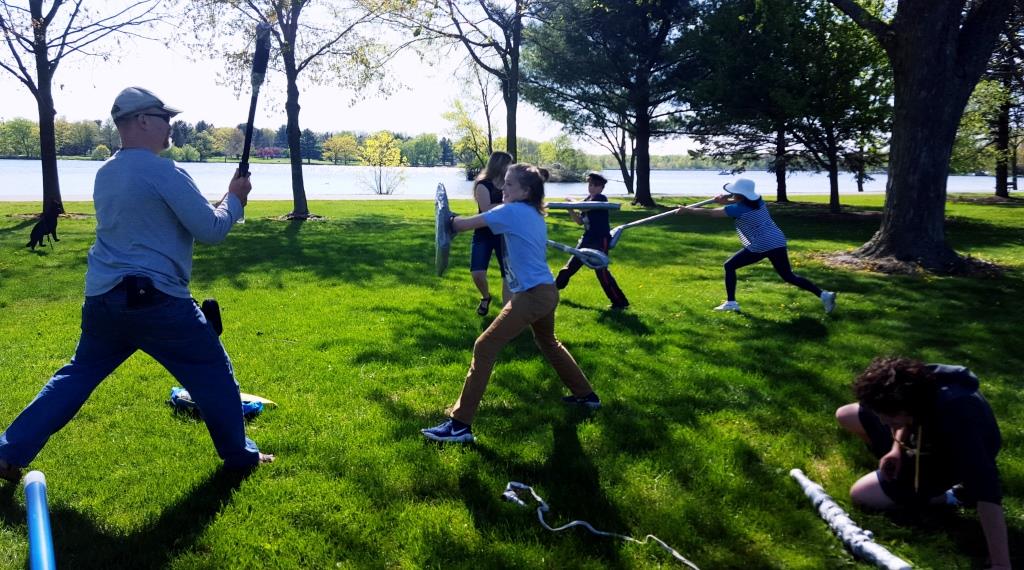 It’s impossible to be outdoors without experiencing the changing of the seasons and the passage of time, and we are now officially past the Time of Mud and transitioning into that fabulous season we all know as summer in Wisconsin.

Something in the summertime light and air makes it particularly compelling, and despite our awareness of the season, time occasionally seems to stop, or maybe even go backwards.

There are always two or three or even more days when everything is perfect and it feels like you’re much younger, almost as if you’ll live forever.  If you’re lucky, the realization that you won’t do so stays dormant for a couple of hours or so.

Maybe you’re sitting on a lakeside beach staring across the water, or leaning on a ball field fence watching a bunch of kids chattering at a batter, or walking along a creek looking at stones under the rippling water, and suddenly you become one of those kids again.

All that’s important is tossing a rock in the water and hearing the “plunk” it makes as it wobbles down to the streambed, and even if your mom was calling you, you wouldn’t care because the stream is so much more attractive than stretching up to the sink to scrub your hands for supper.

No supper for you, mister

That blissfully irresponsible feeling highlighted much of my Mother’s Day weekend, but do not think for a second that I have forgotten it is the house boss, my wife Yami, who allows this. 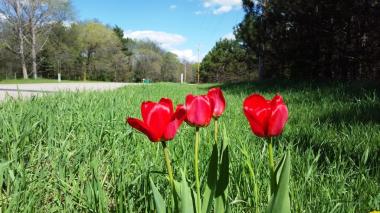 Rather than attending Friday night dinner with the family, I was off hiking the Ice Age Trail again – an early-evening excursion whose time requirement I miscalculated and which, combined with a late start, put me back home a full two-and-a-quarter hours after my promised arrival.

It was while walking along the edge of two farm fields outside Waupaca that the “kid again” feeling struck. Ambling along next to a tall irrigation system that framed the freshly plowed field to my left and the tall trees a couple hundred yards away, I reflected on how woods, half-rusted farm machinery and old barns in the open country still feel full of mystery, intrigue and fascination.

Everything is to be inspected, climbed upon, explored, sat inside, buried, dug up, thrown, squirrelled away, or incorporated into a hidden fort.

I did not do any of that, except for brief examinations, but the idea that I once did – and that other kids would continue to do so – was enough to make the whole evening feel magical. 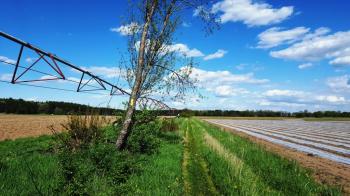 After entering a wooded area between the two fields, I walked another minute or two before spying a crane through an opening in the trees, foraging in the dirt, highlighted by the sharply-angled light that told me I was going to be late getting home.

And I was. But did I do the right thing and make up for it with lawn care or some other form of penance?

No.  I doubled down and hiked again Saturday morning, then attended a separate outdoor-related event in the afternoon.  I pushed my luck by causing both my son and myself to miss Saturday dinner at home – which, to tell the truth, Yami was expecting by then.

When I called, she told me she already was headed out the door with our daughter for their own dining-out time.

A further truth: she’s the boss for a reason.  She more than likely has that mother’s genius for recognizing that sometimes boys will be boys, no matter how old they are.  Every now and then, a mom just has to let the guys tromp around throwing dirt clods at each other to keep everyone happy.

It was not my own regression to childhood that was best about the weekend, though.  To try to make up for my misbehavior, I knocked on our neighbors’ door after Sunday Mass to see if they were up for an impromptu, joint family picnic.

They were, so I gathered everything together on our end, including the family, and we all headed out to Pfiffner Pioneer Park.

As picnics go, it was nothing special, which meant that it ended up being the finest way to spend an afternoon. We had thrown together a few sandwiches, scrounged for desserts, bought a couple of bags of chips, tossed in some soda and beer, and grabbed whatever toys looked promising. 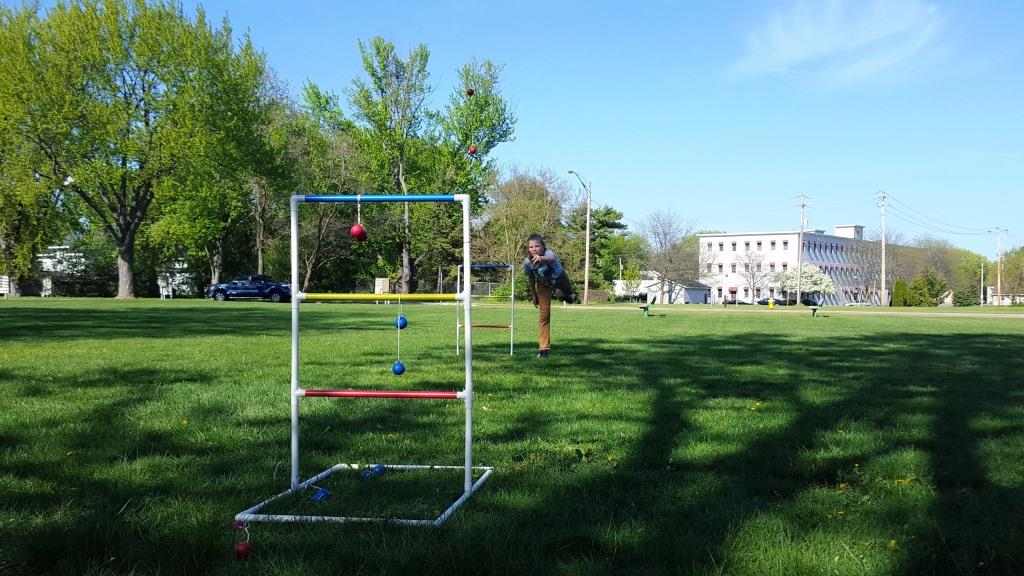 That meant golf toss, lawn darts, and a whole array of stuff that somehow remains far better than game consoles and other modern technology: the duct-tape arsenal.

Traveling with us to Pfiffner  were swords, battleaxes, maces, daggers, shields, and flails – all made of a variety of cardboard, plastic, various storage lids, assorted stuffing, and endless rolls of duct tape.

We simply sat, ate and conversed. The kids ran around with the neighbors’ dog, chased each other about, drank all the soda, and eventually got us off our duffs to play golf toss.

Soon the weapons came out, and six kids (five offspring and neighbor-dad Zach) were in a pitched battle, with Game-of-Thrones-worthy thwacking noises ringing through the park and drawing the attention of passersby.

At one point, four other adults we did not know came by to join into the ageless fascination with youthful battles featuring plenty of gurgling deaths and resurrections. 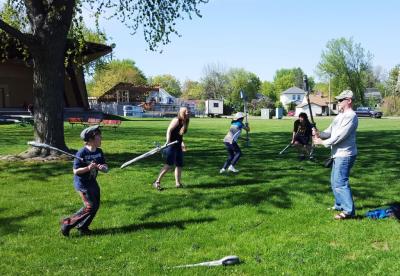 The big winner appeared to be our neighbors’ daughter, Samantha, home from her freshman year at college out of state and apparently full of righteous fury and justice worthy of Joan of Arc.

I stuck with the golf toss and mused about how, 10 years ago, the neighbors’ youngest son had just been born. They were driving back from Chicago with that three-week-old in tow, wondering how a complete  stranger – their new neighbor — had obtained their cell-phone number to ask permission to block our newly shared driveway with a couple of U-Hauls full of furniture.

We quickly added another newborn to the mix across the driveway. The ensuing years have brought us all together many times for holiday celebrations, house-sittings, tool-borrowings, crises, and more than a few park visits.

Our daughter will be 9 years old in a couple of weeks and appears to be following the path blazed by Samantha, energetically mowing down everything in her path. It is very good to know that new Joans of Arc will continue growing up in all our neighborhoods, because we need every leader we can muster, even if just for a rowdy picnic.

The mothers, meanwhile, simply sit back, laugh, and sigh at all of us children as we play and try to grow.

We should all be thankful for their wisdom and patience as we take the time to enjoy these lovely summer days.

This post originally appeared in the May 19, 2017, edition of The Portage County Gazette.