(Author’s note: Continuing my attempts to archive my past Portage County Gazette columns. This one is from May 24, 2017.)

When it comes to protecting our public lands, it’s easy to see recent developments as one step forward and three or four steps back.

Efforts to strip protected status from national monuments and sell off or otherwise allow desecration of Wisconsin public lands by greedy businesses seem to fill the news recently.  These aren’t the best ways to start the summer outdoor season, but it doesn’t hurt to keep them in the back of our minds while we’re out having fun.

That’s my approach to this week’s column, which is meant to celebrate small outdoor accomplishments and major public-private efforts to conserve our natural heritage, such as a new conservation easement at Marathon County’s Mission Lake.

Along with frequent hiking buddy Al Bond, I achieved a minor milestone on May 13, completing the last stretch of Marathon County “tread” (the Ice Age Trail Alliance’s nomenclature for portions that are actual trail as opposed to connecting roads). That was along the Plover River segment of the trail.

This 5.7-mile segment runs through the Plover River State Fishery Area, between the Marathon and Langlade County line on its northeast end and Sportsman Drive on the south, about three miles east of the Dells of the Eau Claire.

This segment is known for its rolling hills in a forested terminal moraine, where glaciers or glacial lobes reached their maximum extent and then melted back. There’s also a “boulder train,” a line or fan-shaped deposit of boulders, and substantial wetlands, including more than 1,000 feet of volunteer-built boardwalk.

Because of the swampy nature of much of the segment, recent rains, and a touch of warm weather, we were treated to plenty of mosquitoes.  Ticks were also out in abundance, and if you’ve been reading about the onslaught of tick-borne diseases in various media this spring, I don’t have to remind you that a hike like this one requires every tick-prevention measure you can think of.

We tried to scare away all the pests by bringing a teenager along.  It didn’t work, but having Al’s son Trevor, a senior at SPASH, as company was an extra pleasure.  This was probably especially so for Al, because instead of being forced to listen to me ramble on about some scholarly drivel, we both got an education about esoteric approaches to governance from Trevor.

Trevor possessed impressive knowledge of politics gleaned from his time on internet discussion forums. But he’s also a normal kid who plays Dungeons and Dragons and is trying to plan more extensive hiking time with us this summer. 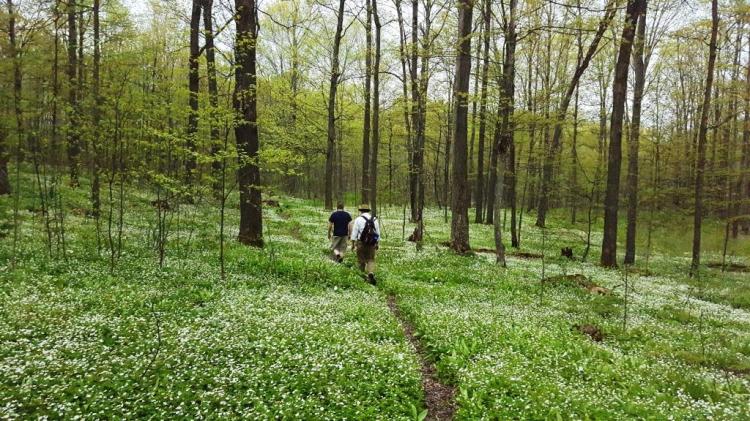 Hepatica on the trail? Perhaps.

He made us feel much better about our future (assuming he gets elected to replace some of the boneheads trying to ruin all our hiking areas). Otherwise, we enjoyed a riot of spring flowers, with a special abundance of trillium and a smaller, more numerous white flower, which I’ve tried to identify in retrospect from insufficient photographic evidence and which may have been hepatica.

Traveling from north to south on the segment, hikers spend a little more than the last half of the trail paralleling the course of the Plover, a Class I trout stream, so there’s a lot of pleasant babbling of water during lulls in conversation.

In addition to a new parking lot off of County HH at the northeastern end of the segment, there’s another parking lot just north of Wisconsin 52 about halfway down the segment.  A third sits just off Village Road almost a mile south of the Highway 52 lot, down a short blue-blazed spur of the trail.

At the Highway 52 lot, we ran into a group of excited birders taking part in the Marathon County spring bird count, hoping to duplicate the highly unusual spotting of a western tanager that had apparently occurred the day before. That’s an “accidental,” a bird rarely documented in one area because it is so far out of its normal range.

With a fourth parking lot at the Sportsman Drive end, there are plenty of places for hikers to join the trail.  We again took two cars and parked at both ends so we could move on to other activities, completing our trek in just over three hours.

Having walked a couple of previously unvisited sections of Ice Age tread on the Hartman Creek and Emmons Creek segments the evening prior, I am now finished with all of the actual trail segments in Marathon, Portage and Waupaca Counties.

Only 25 more Wisconsin counties left.  It was a good way to start off the summer, but there was still a little time left in the day.

Preserving history and the future

Al headed off to pick up our other two boys – Trevor’s brother Owen and my son Sam, both of whom had been unwilling to awaken early for hiking but were up for a visit to Mission Lake. We went for a celebration of a new conservation easement protecting a mile of natural shoreline and 88 acres of forest and wetlands at Waypost Camp.

Waypost, a project of the 75-year-old Crossways Camping Ministries, offers faith-based summer-camp experiences for youth and families, but also rents its facilities for various group events.

The conservation easement is worth noting because the camp, along with Marathon County (which has a park on the western shore) is one of only five riparian property owners on the lake, which is one of the most diverse in the entire state in terms of its aquatic vegetation.

Conservation easements vary in their application, but generally restrict development according to landowner wishes and provide substantial tax benefits and, at times, can be purchased by organizations that work with landowners to set up the easements. A lake-protection grant from the state Department of Natural Resources made the easement possible.

“Ultimately, our organization, Crossways, the DNR, the Wisconsin State Historical Society, and Marathon County have all collaborated to bring this to fruition,” said Janet Smith, executive director of the North Central Conservation Trust, which is headquartered in Stevens Point.

Smith pointed out that the site also has “remarkable cultural resources.”  The historical society designated the entire camp property an archaeological site, and an archaeological study confirmed the existence of native American burial mounds and artifacts from a native summer encampment.

The dedication’s formal program featured a fascinating presentation by anthropologist Ray Reser, director of the University of Wisconsin-Stevens Point Natural History Museum, on burial mounds and artifacts. It was particularly interesting to find out how prevalent these mounds are throughout Wisconsin – essentially, Wisconsin is the world center for them, even if many have been looted or otherwise harmed over the years, and a surprising number are almost literally in our backyards.

There are multiple mounds in the Stevens Point area, including some near highly traveled streets or recreational trails, and Reser noted that anthropologists and others involved in cultural heritage preservation are now beginning to lean more toward openly publicizing such sites to enlist public aid in protecting them.

An equally fascinating pontoon-boat tour to explore shoreline plant communities was led by Paul Skawinski of UW-Extension Lakes and UWSP. The boys, Al and I learned a great deal about various species of bladderwort – a carnivorous aquatic plant – as well as the difference between fens, bogs and other wetlands (much of it having to do with the alkalinity or acidity of the ground).

Our visit to Waypost and Mission Lake was a gratifying look at cooperative agreements between public and private entities, science, and how much they do to protect our natural communities.  After a little more hiking and some rowdy fun by the boys around the grounds, we headed off to recognize that cooperation by supporting the local economy.

We did so at Pike Lake Resort, not too far north off of County Y, where beer-battered bratwurst chunks and Bull Falls on tap (Dr. Pepper for the boys) helped us start the celebration of great partnerships in the outdoors.  And, of course, the planning of our next outing.